The logo, which can be seen on the homepage and printed materials for the project, shows a Whig politician slipping £20 million out of John Bull's pocket. It is from the cartoon below, 'Slave Emancipation; Or, John Bull Gulled Out Of Twenty Millions'. 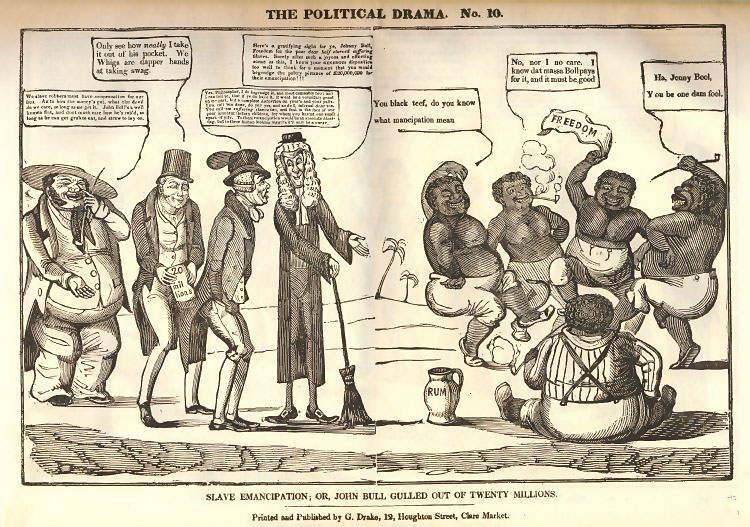 The cartoon was the work of a radical print-maker called C. J. Grant, who, in the aftermath of the 1832 Reform Act, produced a number of different series of cartoons, including the Political Drama series from which this print comes. The various series rejected the Reform settlement, attacked other Whig measures and satirised the professions.

There is a catalogue of an earlier exhibition at UCL which gives details of Grant's work: C.J. Grant's 'Political Drama', a radical satirist rediscovered, ed. Richard Pound (UCL, 1998). There is a brief biography of Grant by R. J. Pound in the Oxford Dictionary of National Biography.

From left to right on the original full cartoon are (1) a slave-owner, dressed in the outfit of a colonial planter (2) the Whig politician (3) John Bull (4) a 'philosopher', an abolitionist dressed in clerical garb and bewigged (5) a group of very crudely racialised caricatures of the enslaved gathered around a jar of rum.

The captions are as follows:

Slave-owner:
'We slave robbers must have compensation for our loss. As to how the money's got, what the devil do we know, so long as we get it. John Bull's a well known flat, and don't much care how he's robbed so long as he can get grub to eat and straw to lay on.'
Whig politician:
'Only see how neatly I take it out of his pocket. We Whigs are dapper hands at taking swag.'
John Bull:
'Yes, Philosopher, I do begrudge it, and most damnably too: and I can tell ye, that if ye do have it, it won't be a voluntary grant on my part, but a complete extortion on your's and your pals. You call 'em dear, do ye? Yes and so do I, infernal dear. You call 'em suffering slaves too, and that in the face of our poor innocent factory children for whom you hav'nt one small part of pity. To them emancipation would be an absolute blessing, but to these bishop looking niggers it'll only be a curse.'
Abolitionist:
'Here's a gratifying sight for ye, Johnny Bull. Freedom for the poor dear half-starved suffering slaves. Surely after such a joyous and affecting scene as this, I know your GENEROUS disposition too well to think that you would begrudge the paltry pittance of £20,000,000 for their emancipation!!'
1st Enslaved:
'You black teef, do you know what mancipation mean'
2nd Enslaved:
'No nor I no no care. I know dat Massa Bull pays for it, and it must be good.'
3rd Enslaved:
'Ha Jonny Bull you be one dam fool.'

Details of the print

The print was from a woodcut printed and published by G. Drake, 12 Houghton Street, Clare Market, London. The copy above is from the UCL Art Collection, UCL, EPC8032. We are very grateful to the collection for permission to reproduce it here.