Second son of William Henry Cavendish Cavendish-Bentinck, third duke of Portland (1738–1809), and Lady Dorothy Cavendish (1750–1794), only daughter of William Cavendish, fourth duke of Devonshire. His elder brother William became the 4th Duke of Portland and was the father of Lord George Bentinck (1802-1848).

He is best known for his overseeing a major period of social, economic, and political reform in India. Some have argued that these laid the foundations for modern India. However, assessments of his importance and the degree of his ideological coherence vary. But John Rosselli (J. Rosselli, Lord William Bentinck: the making of a liberal imperialist, 1774–1839 [1974]) argued that, as D. M. Peers has put it:

' . . .  there was a set of core ideas at work on Bentinck, which included a slow but steady transition from the whiggism of Edmund Burke to the constitutional liberalism of the mid-nineteenth century, a heady dose of evangelicalism, and a paternalistic view of society that justified the autocratic measures that imperial rule often required.' 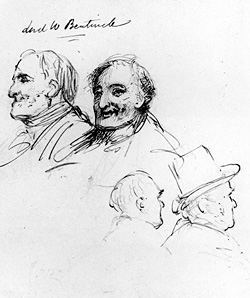