Spouse of claimant or beneficiary

Massot's work and career reflect well the strong connections between Geneva and London in the late 18th and early 19th centuries. While his origins, studies and training were wholy Genevoise, his development and interests would have been influenced at an early stage by the 'contemporary anglophilia' (Louzier-Gentaz, op. cit., p.92) which permeated the city. Linked by religious sympathies, as well as commercial and scientific exchanges, Geneva also - when travel was possible - played host to British grand tourists en route to Italy. Massot was a contemporary and close friend of both Jacques-Laurent Agasse (1767-1849) and Wolfgang-Adam Töpffer (1767-1847). Following Agasse's visit to London, circa 1792, the three artists started collaborating on pictures together, a practice Massot and Töpffer continued after Agasse settled in London in 1800, and Louzier-Gentaz has suggested that Töppfer 'very probably' painted the landscape in the present picture. Töpffer having visited England in 1816, Massot, in 1828 at the age of sixty-two, himself made an extensive tour of Britain over ten months, undertaking commissions from London to Manchester to Aberfeldy. He was very well received and enjoyed his sojourn, before hurredly returning to Geneva on hearing of the sudden death of his son-in-law, Baron Jean-Jacques de Geer.

The sitter in the present picture was the daughter of Theodore Henry Broadhead. She was born at Glynde, Sussex, and married Sir George Henry Dashwood, 5th Bt., of West Wycombe, in 1823. The portrait passed to her brother Theodore Henry Lavington Broadhead, created a baronet in 1831, who subsequently changed his surname to Brinckman, the patronymic given up by his grandfather on inheriting the Broadhead estates in the 1740s.

Of the present picture, Louzier-Gentaz remarks (op. cit., p. 94): 'Quite apart from the composition of the work, the date and signature in the lower right-hand corner distinguish this portrait from the others and render it historically important: Massot did not usually sign, except in rare cases, and especially when the work was painted for a foreign patron.' 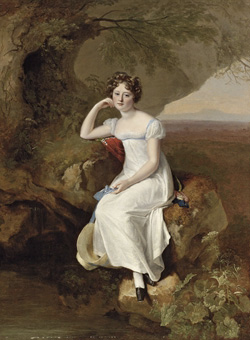