Awarded part of the compensation for the enslaved people on Mackinnon's estate in Antigua.

Politician (Tory MP) & Chief of clan Mackinnon; b. 2 August 1784 in Dauphiné, France; eldest son of William Mackinnon and his wife, Harriet, daughter of Francis Frye of Antigua. Daniel Mackinnon (1791-1836) was his younger brother [Note a]. Attended St John's College, Cambridge; graduated BA 1804, MA 1807; then a student of Lincoln's Inn, but was not called to the bar.

1809: succeeded his grandfather, William Mackinnon, as chief of clan Mackinnon and inherited his estates. He was already wealthy from his father's success in the West Indies and used some of his money to buy back Mackinnon lands in Scotland. On 3 August 1812 he married Emma Mary (d. 1835), only daughter of Joseph Budworth Palmer [Note b] of Palmerstown, co. Mayo, "who was a great beauty and an even greater heiress"; three sons and three daughters. In due course he inherited the Palmer estates. [On the death of his wife.]

Died 1870 at Belvedere, Broadstairs, Kent (one of his properties) and was buried at another: Acrise Park, Kent.

His son William, a Liberal MP, succeeded him as chief of the clan. Another son, Daniel Lionel, killed at Battle of Inkerman (Crimean War, 5 November 1854). Grandson, Sir William Henry Mackinnon, an army officer in southern Africa.

Apart from being an MP, Mackinnon was a Colonization Commissioner for South Australia: see Imperial Legacies and other strands for more on his activities.

Note b: Palmer (1756-1815) army officer then mainly known as a writer: frequent contributor to the Gentleman's Magazine and author of other works including A Fortnight's Ramble to the Lakes in Westmoreland, Lancashire, and Cumberland (1792; 2nd edn, 1795; 3rd edn, 1810); by marriage to Elizabeth Palmer inherited Palmer estates in Co. Mayo, and the name Palmer, when her brother Roger Palmer died in 1811. See Oxford DNB entry for him.

The portrait of Mackinnon is from the National Portrait Gallery: NPG D7664. It is an undated lithograph by an unknown artist. 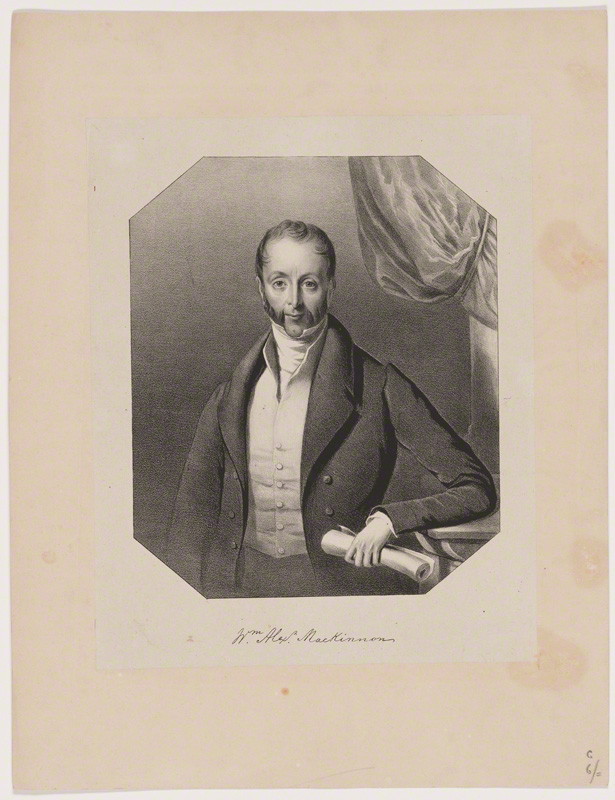