East India Company official, East India banker and MP, whose firm was awarded compensation for several estates on Mauritius as mortgagees. In one further case Sir Charles Cockerell was shown as owner. After abolition, the Cockerell firm was active in the recruitment in India of indentured labourers for Mauritius. His father's interests in the West Indies identified in the Oxford Dictionary of National Biography entry for Sir Charles Cockerell have not yet been identified, although e.g. Debrett's Baronetage 1835 confirms that John Cockerell (1714-1767) died in Antigua. John Cockerell late of Bishops Hull had been a prisoner in the King's Bench in 1765.

Writer, East India Company (Bengal) 1776, factor 1782; assistant. at Bhagalpur 1783, collector 1784; junior merchant 1785, senior merchant 1790; postmaster-general Bengal 1784-1792, returned to Britain 1801; commissioner, Board of Control for India 1835-7. Assisted Wellesley during the Mysore war 1798-9, by making his ‘financial arrangements’ with the Bengal government and commanded the military force raised within the civil service during the war. His baronetcy resulted from Wellesley’s recommendation.

Arrived in Bengal in 1776, attached to the surveyor-general’s office of the East India Company. Befriended by Warren Hastings and Richard Wellesley, 1st Marquess Wellesley in turn. At the same time he became a partner in a 'house of agency'. ('Houses of agency were a relatively new development in British India. They handled the concerns of Europeans in India, acting as their agents for their business dealings, arranging remittances to Britain, and financing shipping, plantations, and other private enterprises.' [Oxford DNB]). In 1784 became a partner in the agency house created by William Paxton. Subsequently managed the Calcutta house (as Paxton and Cockerell, later Paxton, Cockerell and Trail, 'the most successful agency concern of its time'.(ODNB)

Returned to England in 1801. Became partner in the London house of Paxton, Cockerell, and Trail (later Cockerell and Trail, and Cockerell & Co.), which dealt in Indian business as well as banking for British clients.

Also became a director of the Globe Insurance Company, the Arkendale and Derwent Mining Company, and the Gas, Light, and Coke Company.

Lived at Sezincote, Gloucestershire, formerly owned by his late brother John, a colonel in the EIC service. He ‘embellished it in the oriental style said to have inspired the Prince Regent’s Brighton pavilion’. Remained an East India agent with the same partners as in India. As an EIC stockholder was entitled to four votes for the directorate by 1806. Also had a house at Hyde Park Corner, London.

NB that neither the ODNB entry nor the History of Parliament entries make any mention of the Cockerell interests in Mauritius.

The portrait of Cockerell is by Henry Bone, after Andrew Plimer, pen and ink, September 1809. National Portrait Gallery, NPG D17640. 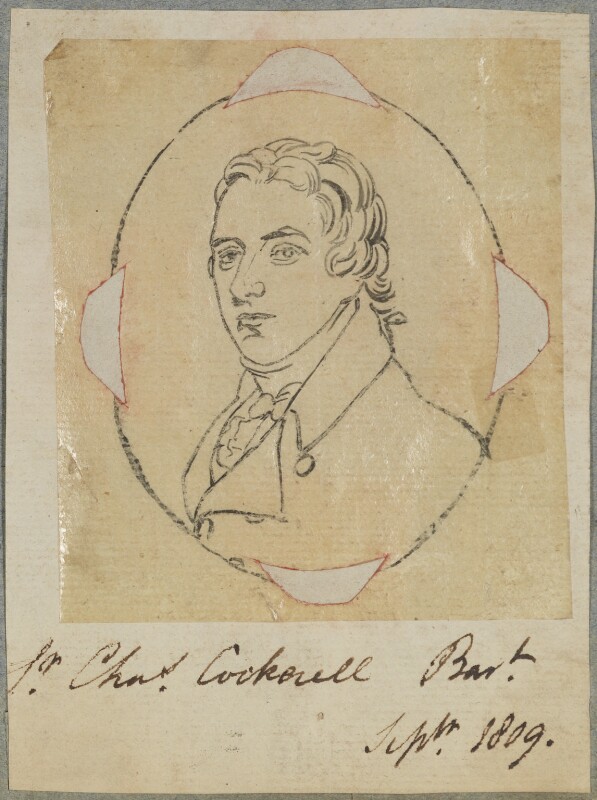