Glasgow merchant, awarded with Charles Stirling and William Stirling (q.v.) the compensation for Rock Spring estate in Hanover and Blue Hole in St James, both in Jamaica, as mortgagees and judgement creditors.

He took an interest in benevolent institutions such as the Blind Asylum and the Highland Society, and was one of the first directors of the Glasgow Union Bank (later the Union Bank of Scotland). He also instituted the Scottish Amicable Life Assurance Society.

In 1826 he married Eleanora McFarlan. He retired in 1845, having bought from his uncle the family estate of Broich. He later took a lead in the formation of the Forth and Clyde Railway.

"WILLIAM LECKIE EWING was born at Broich, in later years known as Arngomery, in the parish of Kippen and county of Stirling, the home of his maternal grandfather, on the 16th May, 1798. His father was the eldest son of Robert Ewing, one of the Balloch family, and his mother was Isabella Leckie, third daughter of Dr. William Leckie, of Broich. His father, Robert Ewing, died at the early age of thirty-three, leaving his widow, with their son not yet a year old and a daughter two years older, having but little of worldly provision, to the care of her relatives at Broich. After the death of Mrs. Ewing's parents, her brothers, particularly the eldest, John Leckie, a well-known writer in Glasgow, assisted her in the upbringing of her children, and they continued to live at Broich. At seven years of age the subject of our notice was sent to school at Aberdalgie Manse, near Dupplin, in Perthshire, Dr. Peddie, the minister of the parish, being recommended as one to whom young boys could reliably be trusted; and here he was well cared for till, at ten years of age, he was sent to the Glasgow Grammar School, and he was boarded with Dr. Chrystal, the senior master, who was a personal friend of John Leckie. He remained at the Grammar School for the usual curriculum of from four to five years. He passed through this part of his career very creditably. He was a strong, good-hearted country boy of quick parts and a good working brain, and he was a great favourite both with his masters and companions. His mother's slender means could not afford a college life for the boy, and it was now thought most expedient that she should remove to Glasgow and make a home for him there, with a view to his getting into some business.

"Through the influence of two intimate friends of his late father, Mr. John Buchanan, one of the Woodlands family, and Mr. Kirkman Finlay, he was recommended to the partners of Stirling, Gordon, & Co., the well-known West India house, and in the summer of 1813 he entered their service as junior clerk. He used to tell with some pride that he was successor at the desk of two distinguished men, Sir Thomas Monro and Sir John Malcolm, who both served an apprenticeship in the house of Somerville, Gordon, & Co., as the firm was styled at the date referred to, before they joined the army, and who met for the first time in after life (having obtained distinguished positions) at the siege of Seringapatam.

"The years which followed were to young Leckie Ewing full of work and happiness. His quickness and aptitude for business gained him a good position in the office, so much so that when chances arose in the partnership of the house, he, in 1825, was admitted to a small share. The principal partners of the old firm at that time were Charles Stirling of Cadder and John Gordon of Aitkenhead, and, in later years, William Stirling, who lived long at Kenmure, his brother Charles Stirling, afterwards of Gargunnock, William Leckie Ewing himself, and eventually Graham Russell, who, as Graham Somervell of Sorn, died not long ago, and William Stirling, junior.

"The period we are now referring to was one full of interest and importance to the West Indian trade. The West India merchants had, both socially and commercially, in great measure inherited the position of the old tobacco lords. The tobacco trade had gradually died out, and the merchants of Glasgow instinctively saw materials of future prosperity in developing the sugar trade with the West Indies. Some years previously they had formed themselves into an association for the better promotion of the interests involved, and the Glasgow West India Association, originating so far back as 1807, still survives. Mr. Leckie Ewing became a member of the association in January, 1828, three well-known merchants joining at the same time, viz., William Mathieson, Frederick Adamson, and James McQueen; and for some years his name appears prominently in its proceedings, alongside of others who recall much that was honourable and aristocratic in the commercial world of Glasgow, e.g., Robert Dennistoun, Alexander Campbell, Colin Campbell, Jura, James Ewing, Archibald and Thomas D. Douglas, William and James Eccles, John Blackburn, and others.

"During the protracted struggle which eventually issued in the abolition of slavery and the prohibition of the importation of slaves into the British possessions in 1833, the West India Association assumed an aspect of resistance to the tide of popular sentiment then running strongly against the West Indies. They were thoroughly in sympathy with the humane and enlightened policy which had been formed for the suppression of the slave trade, but conscious that every care was being taken of the comfort, health, and happiness of the negro population, they regarded with much anxiety the effects of emancipation on a race prone to indolence and idleness. On the passing of the measure the sum of thirty millions was voted by the British Parliament to the owners of slaves. The result of the emancipation of the apprentice labourers on 1st August, 1838, or two years sooner than the original Act had prescribed, served to confirm the well-grounded fears that, for the sake of the negroes themselves, emancipation should have been more gradual; and, without doubt, very great injury was inflicted on the West Indies. Many a man was ruined, and many a fine estate abandoned to barrenness.

"The world prospered with Mr. Leckie Ewing, and in 1826 he married Eleanora McFarlan, eldest daughter of John McFarlan of Ballancleroch, advocate, Edinburgh, the families having already become connected through the marriage of Mr. McFarlan's eldest son to Mr. Ewing's only sister. The West-end of Glasgow, now so beautiful, was not even then to be imagined, and the young couple occupied a small house in Bath Street, thereafter in Blythswood Square and Athole Place, and a large family of sons and daughters were born to them.

"Neither domestic cares nor the claims of business prevented Mr. Leckie Ewing from taking a deep interest in the concerns of the great mercantile community where his lot was cast - its benevolent institutions, such as the Blind Asylum, the Highland Society, and others; its School of Art, and all kindred associations, engaged much of his thoughts. In the proceedings of the Chamber of Commerce and Merchants' House he took a lively and intelligent part. He was one of the first promoters of the Glasgow Union Bank, which in the course of years has developed into the Union Bank of Scotland, and he was an original director. Mr. James A. Anderson, its first manager, was his special friend, and he rendered constant and important assistance in its formation and early progress. In like manner, in conjunction with several other enterprising citizens, he instituted the Scottish Amicable Life Assurance Society at a time when the benefits accruing from life assurance were comparatively little appreciated; and in this way he contributed his quota to the furtherance of principles which in later years have proved such a boon to this community and to the country at large.

"In politics Mr. Leckie Ewing was a Conservative, and he held his opinions strongly, grudging neither time nor money in the furtherance of principles which he considered essential. In 1836 he was chosen, along with Mr. Stephenson Dalglish and Mr. Thomas D. Douglas, as a deputation to proceed to Drayton Manor and invite Sir Robert Peel to a public banquet in the city on the occasion of his installation as Lord Rector of the University. He was wont to recount the details of this incident - their journey in a carriage-and-four (for it was before the days of railways), their arrival and reception by Sir Robert and Lady Peel and their family, the presentation of a huge petition, the dinner party, and the return to Glasgow to announce the result to the citizens assembled in the Trades' Hall. And then followed the banquet in due time; but this is part of the city's history.

"As years went on, changes, of course, took place in the constitution of the old firm; the seniors had died out, and his bosom friend and co-partner, Charles Stirling of Gargunnock, also died, prematurely, in January, 1848. Mr. Leckie Ewing in 1845 retired from business, and having purchased from his uncle, Buchanan Leckie, his life-interest in the old family estate of Broich, he made other additions to the property, which he now named Arngomery, built a comfortable mansion house, where, giving up his Glasgow connections, he resolved to settle. Farming and sport had always great attractions for him: he interested himself much in country affairs, and in the promotion of all that was for the good of the district. With others in Glasgow and the county of Stirling, he took a lead in the formation of the Forth and Clyde Railway; and he made his business habits available for everything that could benefit rich or poor. His genial nature and generous-hearted largeness of soul led him not only to be honoured and esteemed, but really beloved by all who knew him. There may not be many now who remember him in Glasgow in his fresh and young days; but if there are, their recollections will bear out the character sought to be delineated in this sketch. And in the country where so much of his later life was spent, and amongst a numerous circle of family and personal friends, he will ever be thought of as one who well filled his place, and has left a loving memory behind him. He died in 1866 in his sixty-eighth year."

James MacLehose, Memoirs and portraits of one hundred Glasgow men who have died during the last thirty years and in their lives did much to make the city what it now is (Glasgow, James MacLehose & Sons, 1886), 34. William Leckie Ewing pp. 130-131. 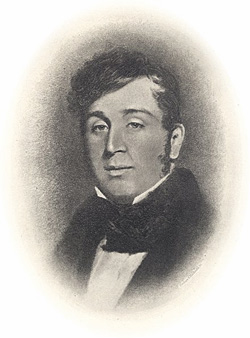