Second son of Sir Francis Baring, 1st Baronet (1740-1810) and of Harriet, daughter of William Herring. His grandfather John Baring (1697–1748) emigrated from Germany and established the family in England.

Brought up in his father's business; became partner at Hope & Co., Amsterdam bank founded c.1720 and with, among other things, important West Indian connections. Marriage in 1796 of Alexander’s sister, Dorothy, 3rd daughter of Sir Francis Baring, 1st Baronet (1740-1810) to Pierre Cesar Labouchere, partner in the firm helped to join the two firms of Barings and Hope.

Alexander sent to the USA for various land deals and formed wide connections with American houses. In 1810, by his father's will, he became head of the family firm. In 1811, when Henry Hope died, he merged the London offices of Hope & Co. into Baring Brothers & Co.

Trustee of the British Museum and of the National Gallery; Privy Councillor; D.C.L. He published, besides several speeches, An Enquiry into the Causes and Consequences of ... Orders in Council (1808), and The Financial and Commercial Crisis Considered (1847).

The portrait (c.1810) by Sir Thomas Lawrence which this was based on is in the possession of ING Barings, London and is reproduced in the entry for Baring in the Oxford DNB. 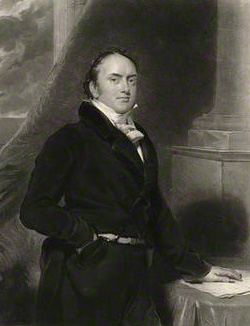