The smartphone takes its place within a much wider shift within intergenerational relations. Where once knowledge was mainly a question of experience, today there are many key dimensions of knowledge, such as the use of digital devices where we expect young people to be more skilled than older people. This reversal of dependence is likely to create tensions between the generations, though sometimes smartphones can bring intergenerational support. In Lusozi, the fieldsite in Kampala (Uganda) that Charlotte Hawkins did fieldwork in, younger people made use of mobile money as a means of helping older relatives who live in their home villages – sometimes, the money would go towards healthcare costs.

To get a sense of older people’s smartphone use, several team members taught smartphone courses in local cultural centres 0- these took participants through various functions, from sharing photographs to using the phone’s calendar. This exercise revealed how at first, smartphones could add to a digital divide – often, these older students would ask younger members of their family to teach them how to do a particular task but found that they were not always helpful, lacking either the time or the patience to take them through the detailed process of how particular aspects of the smartphone work. This is particularly important in Chile, where the national government is aiming to digitalise government services in the near future. However, when older people do become comfortable with smartphones, this may then have the opposite effect – although initially older people may feel excluded, those who master their smartphones may feel more aligned with youth as a result.

In the cartoon below, which is based on Alfonso Otaegui‘s research in Chile, you can see the place of intergenerational relations for an older person learning to use a smartphone in this fieldsite.

Cartoon based on Alfonso Otaegui‘s research, scripted by Laura Haapio-Kirk and Georgiana Murariu, and illustrated by John Cei Douglas. 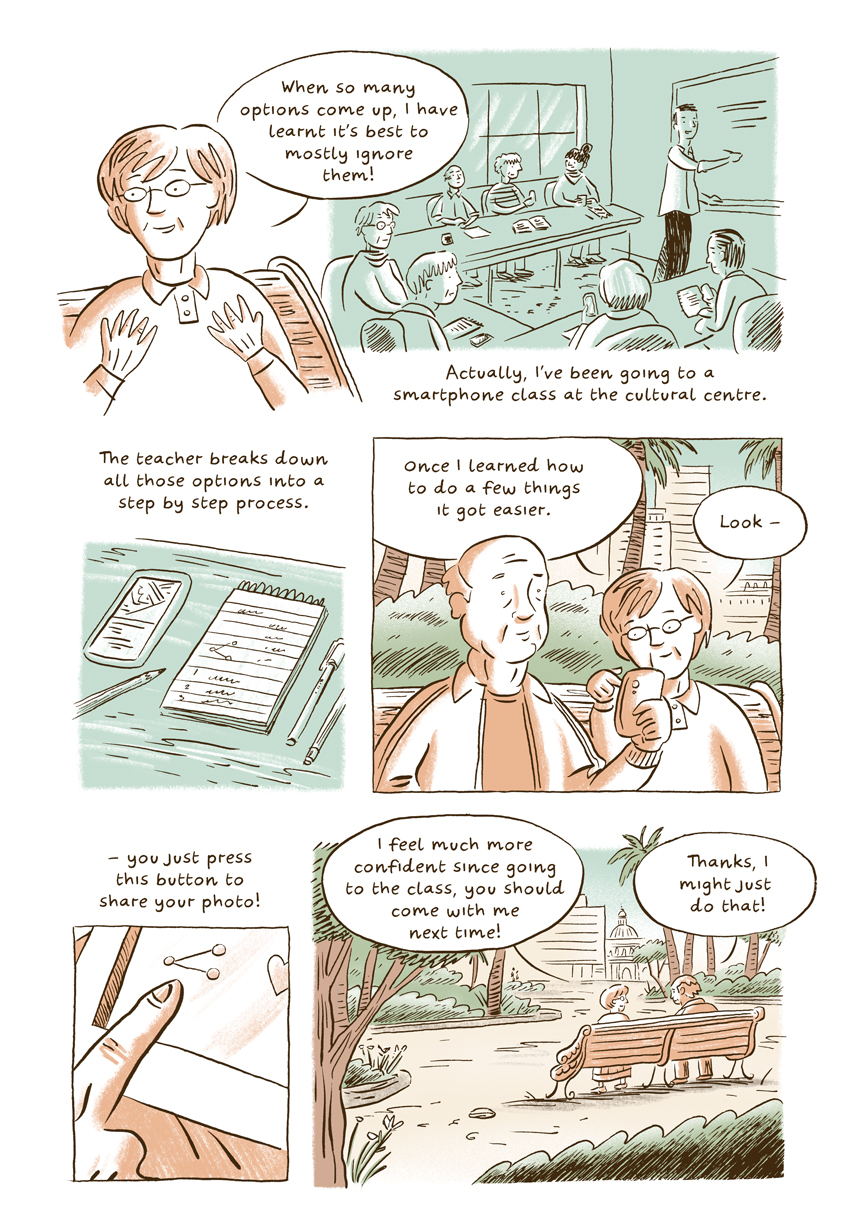 The following short film focuses on a single individual in Chile: Valeria, who after a lifetime of having been a professional, did not want to feel that she did not know what she was doing when it came to learning how to use different functions of the smartphone. This is followed by a film that summarises our observations on the impact of smartphones on intergenerational relations.