He matriculated at Brasenose College, Oxford, in December 1791 and was still in Oxford in 1794.

Buckingham was elected Member of Parliament for Buckinghamshire in 1797 and served until 1813. On 7 June 1804 he opposed Wilberforce’s bill for the abolition of the slave trade, principally ‘because he believed the moment this bill was passed, the death warrant of every white man in the West Indies would be sealed’. Between 1800-01 he was Commander of the Board of Control. In 1806 he was made a Privy Counsellor, appointed Vice-President of the Board of Trade and Joint Paymaster of the Forces in the Ministry of All the Talents headed by his uncle, Lord Grenville. He lost these posts following the fall of the Grenville administration in 1807. In 1820 he was appointed a Knight of the Garter. In 1822 he was made Earl Temple of Stowe.

In April 1796 Buckingham married Lady Anne Brydges (b. 27 Oct 1779, d. 15 May 1836), daughter of James Brydges, 3rd Duke of Chandos and Anna Eliza Brydges (formerly Elletson and born Gamon), Duchess of Chandos. They had a son Richard Plantagenet Temple-Nugent-Brydges-Chandos-Grenville, 2nd Duke of Buckingham and Chandos, who was born on 11 February 1797 at Stowe, Buckinghamshire, England.

There are 39 prints in the National Portrait Gallery associated with Richard Temple-Nugent-Brydges-Chandos-Grenville, 1st Duke of Buckingham and Chandos. He is described as a 'Statesman and print collector' on their website.

He claimed unsuccessfully for the compensation on the Hope estate, which was paid to the trustees of his son's marriage settlement. The Hope estate had come to the family through the Duke's wife Anna Eliza, the daughter of the Duke and Duchess of Chandos. 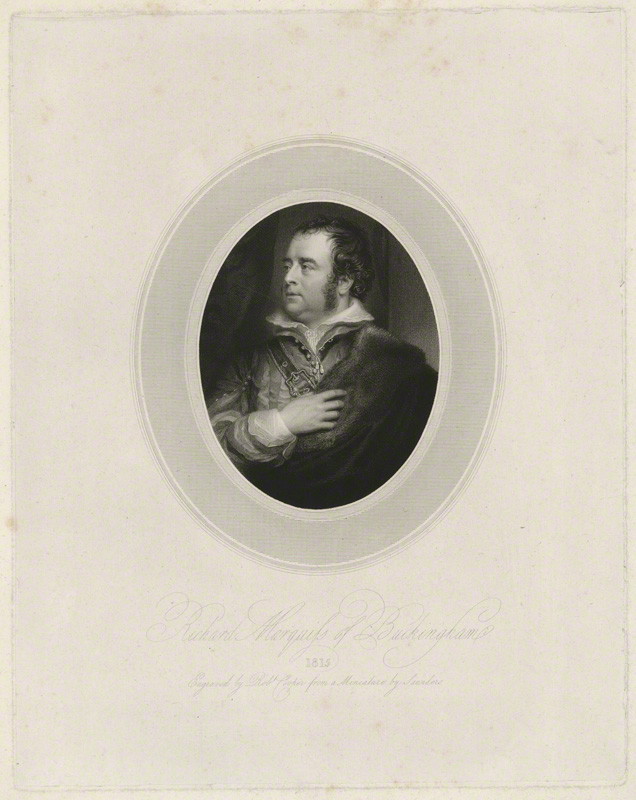