Miles bought the Leigh Court Estate in 1811. According to Stephanie Barczewski, Philip John Miles 1814 demolished the extant house to build a Greek Revival mansion house designed by Thomas Hopper. Left (1845) to his eldest son  by his first marriage (to Maria Whetham), Sir William Miles. The Miles family owned the house until 1917: "with onerous death duties to pay, it was put into a period of institutional use as a hospital."

See also Leigh Court; the house is now (2011) owned by GWE Business West - the Chamber of Commerce for the West of England - and is used for marriages, corporate functions etc. Grade II* listed mansion; Stephanie Barczewski, Country houses and the British Empire, 1700-1930 pp. 26-7. 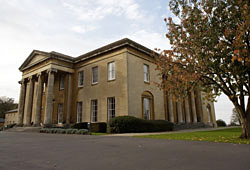